I asked my followers on Twitter, “What are the best fiction books for men?”

“What makes a book ‘for men’ vs. ‘for women’?” the inevitable angry person asked.

My issue is that women seem to read more fiction than men and therefore most recommendations are from women. For example, popular site Goodreads is made up of almost 80% women:

I’m certain that there’s plenty of books with crossover appeal, but my point was just that, generally speaking, how many women are reading Cormac McCarthy? How many men are reading Nicholas Sparks?

I’ve long searched for a comprehensive list of the best fiction books for men. Ultimately, I couldn’t find what I was looking for so I created it. With the help of my Twitter following, which skews more male, I crowd-sourced the list below.

Because they were crowd-sourced, it’s entirely possibly some weirdo recommended something bizarre that doesn’t belong here. If that’s the case, just let me know and I’ll remove it.

Listed first by the number of recommendations they received, the 15 most recommended books are below. 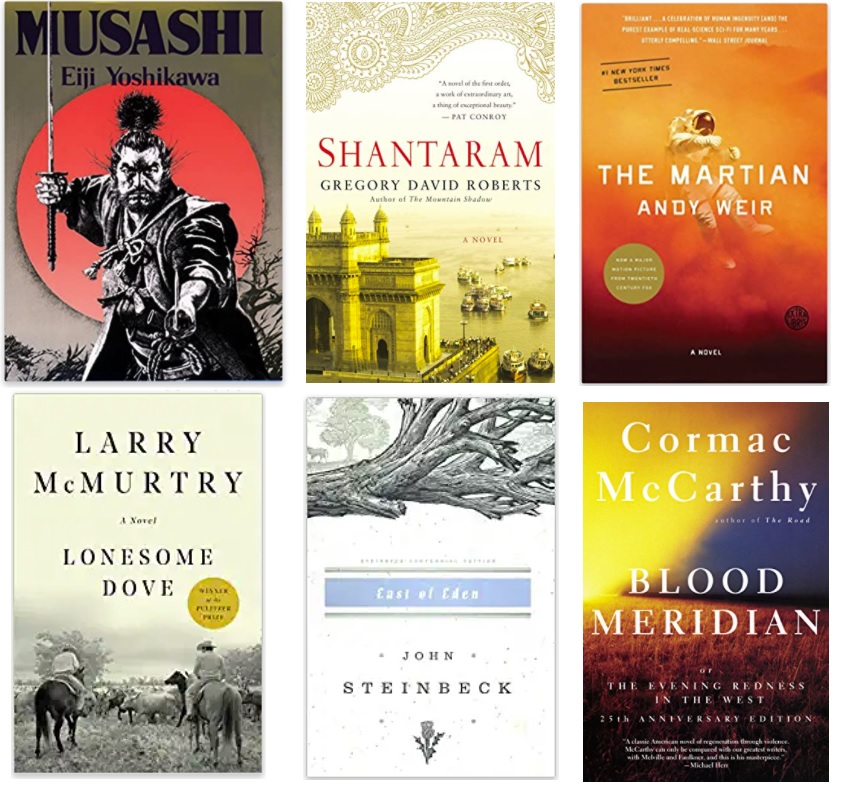 *We pulled the descriptions below directly from their Amazon synopsis.

The classic samurai novel about the real exploits of the most famous swordsman.

Miyamoto Musashi was the child of an era when Japan was emerging from decades of civil strife. Lured to a great battle by the hope of becoming a samurai–without really knowing what it meant–he regains consciousness after the battle to find himself lying defeated, dazed and wounded among thousands of the dead and dying. On his way home, he commits a rash act, becomes a fugitive and brings life in his own village to a standstill–until he is captured by a weaponless Zen monk.

“It took me a long time and most of the world to learn what I know about love and fate and the choices we make, but the heart of it came to me in an instant, while I was chained to a wall and being tortured.”

So begins this epic, mesmerizing first novel set in the underworld of contemporary Bombay. Shantaram is narrated by Lin, an escaped convict with a false passport who flees maximum security prison in Australia for the streets of a city where he can disappear.

Accompanied by his guide and faithful friend, Prabaker, the two enter Bombay’s hidden society of beggars and gangsters, prostitutes and holy men, soldiers and actors, and Indians and exiles from other countries, who seek in this remarkable place what they cannot find elsewhere.

Six days ago, astronaut Mark Watney became one of the first people to walk on Mars. Now, he’s sure he’ll be the first person to die there.

After a dust storm nearly kills him and forces his crew to evacuate while thinking he’s dead, Mark finds himself stranded and completely alone with no way to even signal Earth that he’s alive—and even if he could get word out, his supplies would be gone long before a rescue could arrive.

Chances are, though, he won’t have time to starve to death. The damaged machinery, unforgiving environment, or plain-old human error are much more likely to kill him first. Mark isn’t ready to give up yet. Drawing on his ingenuity, engineering skills—and a relentless, dogged refusal to quit—he steadfastly confronts one seemingly insurmountable obstacle after the next. Will his resourcefulness be enough to overcome the impossible odds against him?

The Pulitzer Prize­–winning American classic of the American West that follows two aging Texas Rangers embarking on one last adventure. An epic of the frontier, Lonesome Dove is the grandest novel ever written about the last defiant wilderness of America.

Journey to the dusty little Texas town of Lonesome Dove and meet an unforgettable assortment of heroes and outlaws, whores and ladies, Indians and settlers. Richly authentic, beautifully written, always dramatic, Lonesome Dove is a book to make us laugh, weep, dream, and remember.

In his journal, Nobel Prize winner John Steinbeck called East of Eden “the first book,” and indeed it has the primordial power and simplicity of myth. Set in the rich farmland of California’s Salinas Valley, this sprawling and often brutal novel follows the intertwined destinies of two families—the Trasks and the Hamiltons—whose generations helplessly reenact the fall of Adam and Eve and the poisonous rivalry of Cain and Abel.

An epic novel of the violence and depravity that attended America’s westward expansion, Blood Meridian brilliantly subverts the conventions of the Western novel and the mythology of the “wild west.” Based on historical events that took place on the Texas-Mexico border in the 1850s, it traces the fortunes of the Kid, a fourteen-year-old Tennesseean who stumbles into the nightmarish world where Indians are being murdered and the market for their scalps is thriving.

I have stolen princesses back from sleeping barrow kings, burned down the town of Trebon, spent the night with Felurian and left with both my sanity and my life. I was expelled from the University at a younger age than most people are allowed in, tread paths by moonlight that others fear to speak of during day and I have talked to Gods, loved women, and written songs that make the minstrels weep.

You may have heard of me.

So begins a tale unequaled in fantasy literature—the story of a hero told in his own voice. It is a tale of sorrow, a tale of survival, a tale of one man’s search for meaning in his universe, and how that search, and the indomitable will that drove it, gave birth to a legend.

At Thermopylae, a rocky mountain pass in northern Greece, the feared and admired Spartan soldiers stood three hundred strong. Theirs was a suicide mission, to hold the pass against the invading millions of the mighty Persian army.

Day after bloody day they withstood the terrible onslaught, buying time for the Greeks to rally their forces. Born into a cult of spiritual courage, physical endurance, and unmatched battle skill, the Spartans would be remembered for the greatest military stand in history—one that would not end until the rocks were awash with blood, leaving only one gravely injured Spartan squire to tell the tale. . .

Set on the desert planet Arrakis, Dune is the story of the boy Paul Atreides, heir to a noble family tasked with ruling an inhospitable world where the only thing of value is the “spice” melange, a drug capable of extending life and enhancing consciousness. Coveted across the known universe, melange is a prize worth killing for….

When House Atreides is betrayed, the destruction of Paul’s family will set the boy on a journey toward a destiny greater than he could ever have imagined. And as he evolves into the mysterious man known as Muad’Dib, he will bring to fruition humankind’s most ancient and unattainable dream.

A poignant look at the disillusionment and angst of the post-World War I generation, the novel introduces two of Hemingway’s most unforgettable characters: Jake Barnes and Lady Brett Ashley. The story follows the flamboyant Brett and the hapless Jake as they journey from the wild nightlife of 1920s Paris to the brutal bullfighting rings of Spain with a motley group of expatriates.

“A Gentleman in Moscow” – Amor Towles

Count Alexander Rostov is sentenced to house arrest in the Metropol, a grand hotel across the street from the Kremlin. Rostov, a man of knowledge and wit, has never worked a day in his life, and must now live in an attic room while some of the most tumultuous decades in Russian history are unfolding outside the hotel’s doors. Unexpectedly, his reduced circumstances provide him entry into a much larger world of emotional discovery.

“The Devil All The Time” – Donald Ray Pollock

Set in rural southern Ohio and West Virginia, The Devil All the Time follows a cast of compelling and bizarre characters from the end of World War II to the 1960s. There’s Willard Russell, tormented veteran of the carnage in the South Pacific, who can’t save his beautiful wife, Charlotte, from an agonizing death by cancer no matter how much sacrifi­cial blood he pours on his “prayer log.” There’s Carl and Sandy Henderson, a husband-and-wife team of serial kill­ers, who troll America’s highways searching for suitable models to photograph and exterminate. There’s the spider-handling preacher Roy and his crippled virtuoso-guitar-playing sidekick, Theodore, running from the law. And caught in the middle of all this is Arvin Eugene Russell, Willard and Charlotte’s orphaned son, who grows up to be a good but also violent man in his own right.

This cult classic of gonzo journalism is the best chronicle of drug-soaked, addle-brained, rollicking good times ever committed to the printed page.  It is also the tale of a long weekend road trip that has gone down in the annals of American pop culture as one of the strangest journeys ever undertaken.

This is the story of the quest of Siddhartha, a wealthy Indian who casts off a life of privilege and comfort to seek spiritual fulfillment and wisdom. On his journey, he encounters wandering ascetics, Buddhist monks, and successful merchants, as well as a prostitute named Kamala and a simple ferryman who has attained enlightenment. Siddartha travels among these people and experiences life’s vital passages–love, work, friendship, and fatherhood.

“How to Get Gilthy Rich in Rising Asia” – Moshin Hamid

“I Am The Messenger” – Markus Zusak

“On the Road” – Jack Kerouac

“Sidetracked” by Henning Mankell (Book 5 of 11)

“The Border Trilogy” by Cormac McCarthy

“The Gone Away World” by Nick Harkaway

“The Left Hand of Darkness” by Ursula K Le Guin

“The Things They Carried” by Tim O’Brien

“We Need to Talk About Kevin” – Lionel Shriver

“Zen and the art of Motorcycle Maintenance” – Robert Pirsig

Well there you have it—more than 80 books.

What did we miss? What doesn’t belong?

Use the comments to let us know and we’ll come back and update the list periodically.